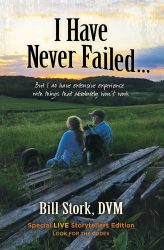 Throughout his life, Dr. Bill has found guidance in the blue-collar adaptations of centuries-old wisdom: I have never failed, but I have extensive experience with things that do not work; there is no such thing as bad weather, just a poor choice of clothes; and shut up and do your work. He has modeled the exemplary lives of his parents and been tailwinded by the unconditional support of his wife, Sheila.

Dr. Bill shares stories about OCD Shepherd crosses and a German Shorthaired Pointer with three testicles. There are tributes to a one-eyed mechanic, the Pike County Jesus, and Certified Nursing Assistants. Dr. Bill shines a light on the plight of loneliness among the elderly, calls into question the dehumanizing effect of technology, and respectfully opposes The Wall Street Journal and Princeton Professor Emeritus Harry W. Frankfurt.

Dr. Bill lives each day to earn the words said, and the tears shed at a Baptist church in Atlanta in April 1999. The two hundred stories he’s written leading up to ADB were only a warmup to properly honor the legacy of The Amazing Dick Bass.

Dr. Stork is a cradle flatlander from central Illinois. He was raised around a dinner table under a starving-artist rendition of The Last Supper. His mom was an incurably kind, comfort food gourmet. Dad was a git-ʼer-done construction worker, welder, and shade-tree mechanic. There was always an extra place at the dinner table for a neighbor with a trailer hitch or a carburetor to rebuild.

He was first moved to write by John Boy Walton on Thursday nights. An aunt gave him James Herriot’s All Creatures Great and Small as a Christmas gift. At speaking engagements he jokes that book cost his dad a thousand hours of overtime because there began his mission to become a veterinarian. His horizons began to expand beyond 1195 Nickey Avenue when he was accepted to The University of Illinois. He ate dinner and roomed with friends who would go on to become doctors, lawyers, rocket scientists, and engineers. His friend Eric helped write Google.

He first crossed The Cheddar Curtain in 1986. A friend invited him to spend the weekend with her family on the river near La Crosse. The sun rose between a Lutheran Church nestled in a valley, and a hip roof dairy barn. Six years later he delivered a Guernsey heifer calf in that barn, two days after he graduated from vet school.

On June 16th, 2021, there will be a party. He will have spent one more day in Wisconsin, than The Land of Lincoln. He will officially declare himself a Cheese Head.

Dr. Bill claims he does not recall many of Herriot’s stories, but he was impressed upon by his heart, his passion for his patients, and reverence of his beloved England.

He can relate. In twenty-eight years, he’s come to love every square inch of Wisconsin, and most of her people (a few took a while).

He is fascinated by perspective and obsessed with the artful exchange of images in any form. That is what the HS series attempts to capture.

Dr. Bill resides—figuratively and literally—at the top of a hill in Jefferson County, Wisconsin. He calls it The Compound. He lives with his wife Sheila, dogs, horses, a twenty-seven-year-old cat, and The Big Stink. Down the hill are Sheila’s parents; her brother and sister-in-law are a hundred yards to the west; and the rest of the family, who have treated him like blood since day one, is just around the corner (later he learned that his sister-in-law Debbie was looking for someone ‘a little younger’ for Sheila.)