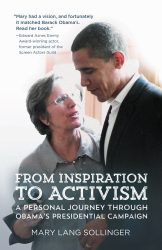 Mary Lang Sollinger offers a fascinating behind-the-scenes look at political canvassing and fundraising while following ordinary people doing extraordinary things for the love of our country.

Mary’s years of fundraising experience culminated in an incredible opportunity to host a fundraiser at her home with Senator Obama in the fall of 2007. Mary believed in all that he stood for and knew that she needed to do whatever it took to help Senator Obama and others seek political offices.

Mary was tireless in her efforts to get out the vote for Senator Obama through canvassing across Madison, Dubuque, Pittsburgh, and Indianapolis. While knocking on door after door, Mary found unique ways to overcome obstacles when trying to connect with people on the other side of those doors. She embodied Obama’s campaign mantra: respect, empower, include.
After the huge success of Senator Obama’s 2007 fundraiser, Mary went on to organize twelve fundraisers throughout Wisconsin in fourteen months. As a result of her fundraising successes, she was asked to serve on President Obama’s National Finance Committee, both in 2008 and 2012.

Mary has generously shared many inspirational and invaluable lessons learned throughout her years of experience. Included in her book is an epilogue with nine lessons and examples of successful fundraising for those who may want to host their own fundraising event.

ABOUT THE AUTHOR - Mary Lang Sollinger

Mary Lang Sollinger grew up in a small town in Wisconsin’s heartland. There were no big things expected of her after high school, no talk of college. In spite of this, she took some risks and became a candidate for mayor in Madison, a prodigious fundraiser and a community activist for causes and candidates she believes in. Along the way, she discovered that only in the United States of America could this happen. This book is to re-kindle the hope that is in all of us. Mary and her husband Hans, live in Madison, Wisconsin.

“I read how Mary Lang Sollinger started out in politics in peaceful Madison with a fundraiser, and then kept piling them on. By the time I got to this book’s chapter about Indianapolis, I become a friend and indefatigable Obama supporter. Mary had a vision, and fortunately it matched Barack Obama’s. Read her book.”

“Mary Lang Sollinger’s book reflects a deep conviction she and I share: civic engagement is a unique power, and through action, we can harness that power to effect change.”

“A good read that makes a great moment in American history feel fresh and alive.”

“The great potential of democracy lies in the magic people create when they decide to give of themselves for the broader public good. Here is a story of the extraordinary journey Mary Lang Sollinger experienced through choosing such a path.”

—Katherine J. Cramer, author of The Politics of Resentment: Rural Consciousness in Rural Wisconsin and the Rise of Scott Walker

“What was going to be one became six fundraisers Mary organized for Barack Obama’s Presidential campaign. She is a master organizer—energizing everyone, making it fun, making it easy, personalizing each event.  I’m not sure how she did it, which is why I want you to take a look at the book. You’ll learn a lot while having fun along the way.”

—Dr. Zorba Paster, National Public Radio host of “On Your Health” and author of The Longevity Code