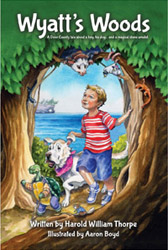 Three-hundred-and-fifty-years ago, a Potawatomi Indian boy named Red Eagle carved a small bear out of limestone. It was lost during a legendary battle at Fort Mechingan, somewhere deep in the woods of what is now Door County, Wisconsin. Although searchers have tried, no sign of the fort has ever been found. While spending the summer in Door County, a boy named Wyatt decides to look for it. Meanwhile, a Potawatomi boy named Robert listens to the story of his ancestor, Red Eagle. Robert wonders, too, what happened to the fort and the carving. Finding them will unforgettably connect Wyatt, Robert and Red Eagle. But as the summer draws to an end Wyatt has still not found the fort, despite lots of help from woodland animal friends and his loyal yellow lab, Bailey. Will Fort Mechingan – and the carved bear – remain buried forever in Wisconsin’s Northwoods?