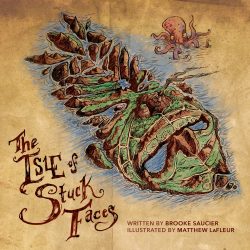 The Isle of Stuck Faces

This epic poem tells the legendary tale of Steve “Stick” Vizage, a young boy who loves to express himself—and not always pleasantly—by making faces. Stick learns about the consequences when he comes face to face with his babysitter, the imposing Madame Mugg, who warns him that his facial features could freeze in place, given a certain situation. Adventure ensues as she decides to teach him an important lesson about manners, mannerisms, and treating others with respect. Come along for the ride of a lifetime with The Isle of Stuck Faces, a book for kids and adults of all ages with maturity issues.

ABOUT THE AUTHOR - Brooke Saucier

Brooke Saucier has been molding and twisting the English language to suit his needs—prose, poetry, puns, Dad jokes—for most of his life. Born and raised in Memphis, Brooke ventured north for his education at the University of Illinois, where he acquired his first of many winter coats. He has been cold ever since, with a three-decade stop in Chicago and Evanston as a precursor to his settling with his wife, cat, and two dogs in Madison, Wisconsin, where he found a closet large enough for his collection of coats and jackets, which are suited for many climes. Over the years, Brooke has held many titles—banker, membership director, distiller, brand ambassador, preschool teacher, property manager—but his absolute favorite is used only by his amazing daughter, Julia: Dad

ABOUT THE ILLUSTRATOR − MATTHEW LAFLEUR

Matthew LaFleur was born with a crayon in his hand and goofiness in his soul. As an illustrator for 25 years, Matthew has created illustrations for The Wall Street Journal, artwork (boards, cards, box) for a tabletop game called Ultimate Treehouse, book interiors and covers for whodunits, baseball trivia, and MENSA puzzles. Matthew has illustrated labels and shirts for breweries like Smylie Brothers Brewing Co., Une Année Brewery, Sketchbook Brewing Co., Transient Artisan Ales, DryHop Brewers/Kuma’s Corner/Illinois Craft Brewers Guild, and Hop Butcher For The World. Matthew illustrated a children’s picture book called The Toothless Fairy, which can be found on Amazon. He currently lives north of Chicago and is the proud father of two art- and music-loving kids.