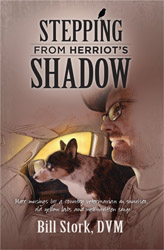 Dr. Stork refuses to refer to himself as an author. He’s far more comfortable being called a storyteller with an amazing stable of friends, unique perspective, and two editors who are both skilled and tolerant.

Four years ago, Dr. Stork sat down to write stories about dogs, cats, cows, farms, families, and faith. Collectively they become In Herriot’s Shadow, a book about humanity. He is still a country vet practicing in a small town in Wisconsin, writing with the same unique voice, but Stepping from Herriot’s Shadow is anything but a continuum. The book you are holding is bound and printed, but it is a snapshot. The writings and reflections that have become Stepping from Herriot’s Shadow are alive. Their direction is unknown. The path will be guided by a pearl plucked from conversation with the next farmer, teacher, or tap dancer he encounters.

He moves from responding to road-raging “Prius Pete,” to celebrating survival in “Family Tradition.” Amazon reviewer Sarah said of In Herriot’s Shadow, “He doesn’t write much about animals.” Well, Sarah, here are stories about elusive Jack Russell terriers, free range pigs, old black Labs, rampaging cows, and skunks. There are also stories about WWII Veteran barber, anger management, serendipity, and gaining strength by way of a sick daughter, or climbing a mountain.

Sarah also lamented, “Never with the grace and self-deprecation of Herriot.” Sarah, you’ll be delighted to read how he had his backside handed to him by a Holstein with a roundhouse right, a professor in vet school, and his son.

Music and storytelling is an art, a form of living history, a way to explore human interaction.

Dr. Stork says, “Tell the story. Only then do you know the end.”

A veterinarian by trade and a keen observer of the American experience, Dr. Bill Stork has an innate ability to see the best in people and appreciate the simple pleasures of a life well lived.

In his books, Stork delivers powerful accounts of people, places and things tht many others would allow to go unnoticed. His stories are not those of politicians or titans of industry, but rather of ordinary folk who are not so ordinary upon closer inspection.

Stork’s father said he never learned a thing with his mouth open. That friendly curiosity has been passed on to the son.

At various points in his life he’s answered to Bill, Billy, Bill Bill, Little Bill, Willie, The Hick, Daddy, The Professor, Dr. Bill, Dr. Stork and sill does to this day. This book would not exist without Mittsy Voiles, Glenn Fuller, Robb Grindstaff, and many he’s encountered throughout his journeys.

Since writing his first book, Stork has been humbled and honored to meet his readers at local bookstores, pet wellness expos, and winter festivals where he signs and sells books. Each has story of their own to share and Stork is always more than happy to listen.

The author says he’s been buoyed and encourage by critics some complimentary, some not so much. As a result, his appreciation for those who bank their existence on their artistry and craft has risen exponentially from its already sky high levels.

A 1992 graduate of the University of Illinois College of Veterinary Medicine, Stork currently lives in Cambridge, Wisconsin, and is the owner-operator of the Lake Mills Veterinary Clinic in Lake Mills, Wisconsin.

When not writing or wrangling animals, he can be found engaged in multi-day bicycling tours, tracing the roots of American music through the Deep South, searching for the perfect piece of beef brisket, or simply having a pint at the local brewery.

Like a fine bourbon, his stories are immediately entertaining, but even more enjoyable upon reflection.