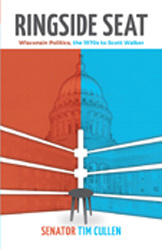 A candid and insightful book covering the last 45 years of Wisconsin politics. RINGSIDE SEAT: Wisconsin Politics 1970 to Scott Walker takes a look at not only at the Act 10 episode but also Cullen’s upbringing, how he came into public service, the two eras he served in the State Senate, the changes that occurred between these two time periods and the observations he made from his “ringside seat.”

“…part memoir, part attempt to be a political-instruction manual, part history of nearly half a century of Wisconsin politics, part critique of politics today and part critique of the Walker governorship. This book is also an effort to tell the true story of Wisconsin values which are more important than any one person or any one governor.”

Ringside Seat has chapters on the nature of politics, then and now; Act 10 and the true story on the Illinois episode; how gerrymandering has severely affected democracy in Wisconsin; the manipulation of the facts on the mining issue in northern Wisconsin; and, in Scott Walker’s own words, the dropping of “bombs” on Wisconsin such as the attack on the University of Wisconsin System including the ill-fated effort to eliminate the commitment the UW-Madison has had to the pursuit of truth since 1892, the Voter Suppression I.D. law, the refusal to grant any pardons (unlike his predecessors), leading the effort to eliminate the Government Accountability Board, orchestrating the attempt to gut Wisconsin’s Open Records statute, and trying vigorously to replace Wisconsin’s civil service system with a return to political patronage. The list of other “bombs” could go on for much longer.”

ABOUT THE AUTHOR - Senator Tim Cullen

Tim Cullen was born and raised in Janesville, Wisconsin. Cullen graduated from UW-Whitewater with a Major in Political Science with a minor in History. The first election he won was to the Janesville City Council in 1970. Four years later Cullen was elected to the State Senate at the age of 30. He went on to become Senate Majority Leader and in 1987 he became Secretary of the Department of Health and Social Services under Governor Tommy Thompson. In 1988 Cullen took a job with Blue Cross and worked with them for the next 20 years. In 2010 he decided to run for his old Senate seat. He was elected and served until 2015. Today Cullen still lives in Janesville and spends his time working with the two foundations he started.

Cullen will donate all profits from this book to the Janesville Multicultural Teachers Opportunity Fund he started in 2008. The sole purpose of the Fund is to raise money for college scholarships for Janesville students of color. The goal is to support those students who wish to become teachers and are willing to return to Janesville to teach for at least three years.