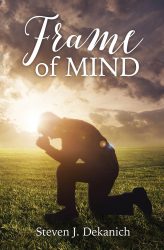 At age 18, Joey Slunisky is excited for the future. With a sharp mind and plenty of ambition, he can’t wait to start college and put himself on the path for his dream career in nuclear and metallurgical engineering.

Then, like a bolt out of the blue comes a shocking diagnosis: cancer. With that one word, Joey feels like his whole world is coming to an end. His first reaction is disbelief, followed by anger, fear, and depression. The deforming cancer surgery cuts out half his throat and left shoulder muscles. The repulsive image takes its toll on his body and his spirit, and all he wants to do is withdraw from the world. But thanks to God’s blessings of the support of a loving family and friends, as well as the intervention of a skilled and caring doctor, Joey is able to heal both physically and mentally. After a few months, he starts college with his ambitions back on track.

Unrelentingly, life hurls overwhelming obstacles in Joey’s path. Repeatedly the cancer rears its ugly head. Every time Joey moves two steps forward, a new cancer diagnosis drags him one step back. Again, the wise and kindly Dr. Saabs intercedes to help keep Joey’s demons at bay. Joey begins to understand that his attitude, even more so than his physical challenges, will determine his future.

With a never-give-up attitude, Joey embarks on a positive start to his career. He finds the love of his life and then parlays a position from a student metallurgist program into an attractive job offer as a metallurgical engineer. It’s a promising start for a young engineer, but Joey has his eyes on a bigger prize. Despite continuous health problems and countless setbacks, Joey never lets go of a professional dream that can be summed up in two words: Oak Ridge.

This inspiring story of a young man who has his life sidelined time and time again shows that while we can’t always control the things that happen to us, we can control how we respond. The type of life we have is dependent upon our frame of mind.

ABOUT THE AUTHOR - Steven J. Dekanich

Steve Dekanich is a writer, metallurgical and nuclear engineer, husband, father and grandpapa. Steve’s writings span numerous areas from technical writings and international awards in the fields of metallurgical and nuclear engineering to being awarded First Place in the Nation for Communications by the U.S. Savings Bonds Division of the U.S. Government. Steve wrote a special poem that was used as a Hospitality House team theme for an American Cancer Society Light the Night Walk. A Dove Award winning artist made the poem into a ballad.

From an early age, Steve’s life was wrought with illness and challenges ranging from scarlet fever, 19 recurrences of cancer, losing his first wife to cancer, open-heart surgery, the list goes on and on. Steve’s faith in God and the intervention of several Earth Angels helped him to overcome the trials and move on with his life. He has been able to share his experiences with other people going through similar challenges and helped them through their ordeals.