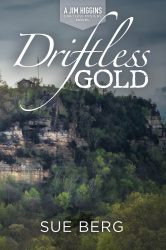 A migrant worker is discovered buried in a local quarry with an antique gold coin in his pocket near La Crosse, Wisconsin.

Lt. Jim Higgins begins to unravel a murder that will take him back into Wisconsin’s early history. During the investigation, Higgins meets a local archaeological savant and treasure hunter who tells him a wild tale about a U.S. Army payroll that was stolen on the way to Fort Crawford in Prairie du Chien in 1866. The payroll has never been recovered. Is the coin on the dead man part of the stolen treasure?

Higgins hesitates to base his investigation on a wild tale, but he has nothing else to go on. As his team desperately attempts to make sense of the facts, the killer strikes again. The investigative team realizes the wild tale may be the only explanation for the two murders. In a race against time, Jim struggles to identify the killer—and find the elusive gold treasure.

ABOUT THE AUTHOR - Sue Berg

Sue Berg grew up with family stories about hunting and fishing adventures, slightly irreverent relatives, and family sagas of immigrant descendants. Growing up with four brothers in the little Wisconsin town of Glenwood City, she tagged along as the odd-girl out and participated in wild risk-taking and saucy adventure—all at the hands of her daring siblings. Later, after a career in teaching and the trials and eventual successes of raising four children to adulthood, the smoke cleared. Through all the ups and downs, Sue continued to read a variety of literature. Completely by accident, she came across the book, Shut Up and Write! by Judy Bridges, founder of Redbird Studio in Milwaukee. The advice struck a chord in her. She sat down at her computer five years ago and began writing. Driftless Gold is the story that wouldn’t leave her alone and Judy’s sage wisdom that launched her career as a writer.

Sue lives with her husband in the Driftless area. When she’s not writing, she enjoys quilting, watercolor painting, camping, gardening, hiking, and sitting around campfires with her four children and eight grandchildren.

Deeply engaging and absorbing. A thrill ride of twists, turns, and romance at the same time. When I finished reading Driftless Gold, I was ready to read the next book in the series.

An interesting and captivating mystery set in La Crosse and surrounding southwestern Wisconsin. The story is centered around missing 1866 gold coins from Prairie du Chien, a couple of murders to cover up the recently discovered treasure, and a love story between two characters. The third-person perspective reveals the killer’s side of the story. I am looking forward to the second book in the series based on the character Jim Higgins.

I found Driftless Gold to be a very intriguing and enjoyable mystery with a little romance thrown in. Anyone who has lived or spent time in the Driftless area will find familiarity with the setting and the interesting, hard-working main characters. I give Sue Berg’s first novel two thumbs up!

Sue Berg’s Driftless Gold takes us to the bluffs, coulees, and winding roads along the Mississippi River in western Wisconsin. The dramatic landscape is blended into an irresistible tale of lost treasure and the scoundrels who will do anything to get their hands on it—even murder.

Murder, hidden treasure, and a side of good old-fashioned romance make Driftless Gold a delightful read. Berg does a superb job of developing her characters and creating a sense of place. I felt like I was traversing the La Crosse area and the Driftless region along with Lt. Higgins and his team.

Set in midwest Wisconsin, this suspenseful mystery intertwines with a love story and takes you through the dips and valleys of the Driftless region while solving a murder. As the book unfolds, it keeps the reader guessing and in suspense. With each page, more is revealed about the characters and who they are, helping the reader understand their journeys. A must read!