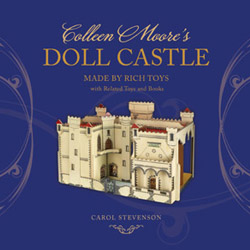 Colleen Moore’s Doll Castle, Made By Rich Toys, with Related Toys and Books

Colleen Moore, one of First National Studio’s most famous silent film stars, took her fabulous Fairy Castle on a nationwide tour in 1935 to raise money for children’s hospitals and charities. Many companies saw this as an opportunity for a merchandising tie-in. This book gives a brief background of the tour and concentrates on toys which were available from Rich Toys, Effanbee and Tootsietoy.

ABOUT THE AUTHOR - Carol Stevenson

Carol Stevenson, a native Chicagoan, started collecting dollhouses and toys in the 1970s. At that time, she also became a member of the Wee “c” Miniature Club in the Chicago area, as well as a member National Association of Minature Enthusiasts.

Carol divides her time between Chicago and Mineral Point, Wisconsin. In 1997, she opened the Mineral Point Toy Museum to display and share her collection. The museum was closed in 2007, but many photographs of the toys from the collection are shown in the book Toys Buildings 1880-1980 by Patty Cooper and Dian Zillner.