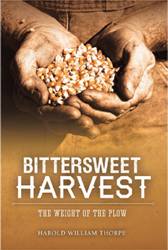 Will O’Shaughnessy has left behind Ashley Springs, and his car dealership, and moved his family to a dairy farm in the hills of southwestern Wisconsin. Now, as the Great Depression gives way to World War II, his daughters are growing up. Neighbors are driving gasoline tractors, but he’s still plowing with horses and milking by hand. Will is living his dream. But challenges bear down. His wife, Mary, insists on taking in their wild teenage niece from Texas. Accidents, unreliable farmhands and weather take their toll. Bills are piling up. He’s wrangling with other dairy farmers about forming a co-op. His troubled, maimed brother Jesse might be back. And did someone purposely set out to sicken his herd? Will is beginning to think that his grandfather was right, that he doesn’t have what it takes to run a farm.

Harold William Thorpe grew up in Southwest Wisconsin and lived on farms for brief periods when he was very young. He spent many happy hours at his relative’s farms, and during his teen years he detasseled corn, worked two summers as a live-in farm laborer, worked one summer as a Surge milking machine sales and service man, and worked part of another summer as a United States Department of Agriculture field man. After high school, he graduated from UW-Platteville with an education degree. He worked for eleven years in Janesville, Wisconsin — first as a general education and special education teacher, then the last four years as a school psychologist. During these years he started a business and earned a masters degree in educational psychology at UW-Madison. Afterward, he left Janesville for Utah State University where he earned a doctorate degree in education.

After retirement, he decided to learn how to write fiction. Bittersweet Harvest is Book II of the O’Shaughnessy Chronicles.