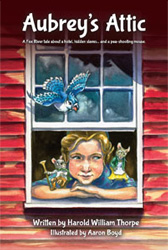 Nine-year-old Aubrey has won the lead in a history play about her hometown of Butte des Morts, Wisconsin. Mystery and adventure follow as Aubrey digs for a costume in the attic of an old hotel called the Trading Post. Nearly 200 years earlier, escaped slaves were hidden in the hotel. The Trading Post was a stop on the Underground Railroad that helped slaves travel to freedom in Canada. Grandma Carver, an ancestor of Aubrey’s new friend, Tilisha, was an escaped slave who might have hid in Butte des Morts before disappearing without a trace. Does the attic hold the key to what happened to her? Can friendly attic mice help the girls find the answer? When a ferocious owl steals an important clue, the girls, mice, and a gaggle of zany birds must work together to retrieve it. Will they succeed? Or will Grandma Carver’s fate remain a mystery forever?