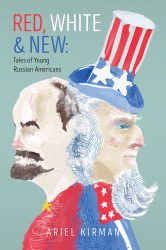 Red, White & New offers a fascinating, firsthand account of the immigration experience of refugees from the former Soviet Union who came to America as children. Through a series of 20 personal histories, the immigrants present their testimonies—why their families left the old country; what the immigration journey across the Iron Curtain was like; how they struggled and succeeded in America; and how they feel about the dual identity, with one foot in the old world and one in the new.

ABOUT THE AUTHOR - Ariel Kirman

Ariel Kirman is a senior at Trinity School in New York City, where she lives with her parents and younger brother, Shaye. She is the child of two immigrant parents, who both came to America from the former Soviet Union at age eight in the late 1970s. She works with and advocates for immigrants and refugees, and in her spare time, she pursues her passions of debate and writing. She is the executive director of the New York Parliamentary Debate League and the captain of her school’s two debate teams (parliamentary and public forum). Ariel also writes for and edits a number of publications at her school, as an editor-in-chief of The Bruner (Trinity’s yearbook), The Trinity Review (Trinity’s political magazine), and Diversion (Trinity’s modern language magazine). When she’s not doing any of that, Ariel bakes cookies with her mom, watches (lots of) movies, and plays ping pong (and hopes to one day beat her dad in a game!).