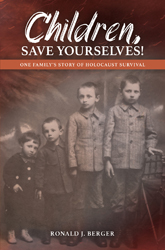 Children, Save Yourselves! is a compelling true story of two Jewish brothers who survived the Holocaust in Nazi-occupied Poland. One brother, the author’s father, endured several concentration camps, including the infamous camp at Auschwitz, as well as a horrific winter death march. The other brother, the author’s uncle, survived outside of the camps by passing as a Catholic among anti-Semitic Poles, including a group of anti-Nazi Polish partisans, eventually becoming an officer in the Soviet Army. The book traces the defining prewar, wartime, and postwar events that marked their extraordinary lives.

ABOUT THE AUTHOR - Ronald J. Berger

Ronald J. Berger is professor emeritus of sociology at the University of Wisconsin-Whitewater. He has published numerous books and articles on topics that include crime and criminal justice, disability, and the Holocaust. Born and raised in Los Angeles, California, he currently lives in McFarland, Wisconsin.