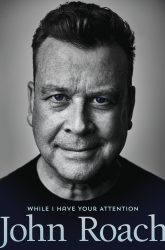 While I Have Your Attention

For the last 25 years, writer and storyteller John Roach has held court on the back page of Madison Magazine. With musings on everything from politics and religion to family and cabin life to sports and his many obsessions—music, technology, books, weather, and hometown Madison—Roach has entertained and occasionally enraged readers with often witty and always astute observations on life as he sees it. John published another collection, Way Out Here in the Middle, in 2003. In this second edition of his greatest hits, Roach shares a collection of some of his favorite and most popular columns, which reveal as much about his edgy irreverence as they do of his soulful sentiment.

ABOUT THE AUTHOR - John Roach

2018 marks John Roach’s 25th anniversary as the “back-page” columnist for Madison Magazine. In 2003, a selection of the first 10 years of his columns were compiled into a book, “Way Out Here in the Middle.” The latest book, “While I Have Your Attention,” highlights John’s favorites and most memorable from 2003-2018.

He is founder and president of John Roach Projects, a video and film production company based in Madison, Wisconsin. Before returning home to put down roots and raise his family, John was a producer at CBS and ABC in Chicago for six years. He developed and produced “The SportsWriters on TV,” which ran for 13 years and was hailed by Sports Illustrated as the template for all television sports talk shows. His credits also include six Chicago Emmys, a National Iris Award for Best Television Special and a national CableACE nomination.

John and Mary Sweeney co-wrote the screenplay for, “The Straight Story,” a movie directed by David Lynch and starring Richard Farnsworth, who received an Academy Award nomination for Best Actor. The screenplay was nominated for an Independent Spirit Award. “Like Hemingway’s dialogue,” wrote Roger Ebert, “the screenplay by John Roach and Mary Sweeney finds poetry and truth in the exact choice of the right everyday words.”

In 2018, Roach was awarded lifetime membership to the Writers Guild of America.

John lives in Madison with his bride, Diane, with whom he launched three amazing children into the world: Kate, Maggie and JT.

John Roach is a man of few words, but those words have captured a quarter-century of Madison zeitgeist, for all its exquisite absurdity. He says a lot with a little, and he does so consistently, month after month, year after year. Most will never know what a feat that truly is, but we appreciate it all the same.

John Roach is funny, insightful, and full of life—and those qualities shine through every story he writes about Madison or the larger human condition.

John Roach gives us something we don’t have enough of: Context. Also, when context demands, humor. And once in a while he comes out with a “I don’t give a damn WHAT you think” column that probably could have been nipped a little earlier in its melting-like-a-snow-angel life but then we wouldn’t have given a damn, either. I’m pretty sure he does that intentionally.