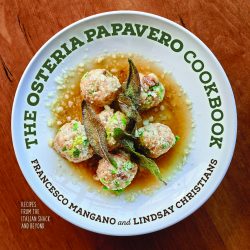 The Osteria Papavero Cookbook
Recipes from the Italian shack and beyond

By Francesco Mangano and Lindsay Christians

Osteria Papavero, lovingly known as the “Italian shack” in downtown Madison, Wisconsin, has welcomed guests into a warm, sunny space on East Wilson Street since 2006. Here, hungry diners find wild boar pasta and decadent silky budino, stew with octopus, and a classic lasagna Bolognese. Specials change daily to meet what’s most in season, and the curiosity of a thoughtful, passionate chef.

Papavero chef and owner Francesco Mangano grew up in Bologna. The menu in his restaurant combines recipes he loved in northern Italy, years of study in professional kitchens and at the University of Siena, and the wealth of a farmers market just steps from the restaurant’s door. Mangano believes in tradition and classic, rustic flavors. He has a deep commitment never to waste, a humble approach to his work, and a respect for his ingredients and staff.

In this book, Mangano shares more than 40 of his favorite recipes, adapted for and tested by home cooks. From panzanella and pappa al pomodoro to carrot ginger soup and Papavero’s famous butterscotch pudding, the Osteria Papavero Cookbook invites you inside the Italian shack—and beyond.

ABOUT THE AUTHOR - Francesco Mangano and Lindsay Christians

Francesco Mangano is the chef and owner of Osteria Papavero, open in downtown Madison, Wisconsin, since 2006. Born in Bologna, Italy, Mangano earned a bachelor’s degree in history from the University of Bologna, a culinary degree from Madison College and a master’s degree in Food and Wine Tourism and Promotion of Local Products from the University of Siena and Arezzo in Tuscany. He lives in Madison with his three kids.

Lindsay Christians (she/hers) is the food editor at The Capital Times in Madison, Wisconsin, and the author of Madison Chefs: Stories of Food, Farms and People from the University of Wisconsin Press. In addition to The Capital Times, her food writing has appeared in Daily Coffee News, Eating Well, Feast & Field, Growler, The Heavy Table, and Zagat. lindsaychristians.com.