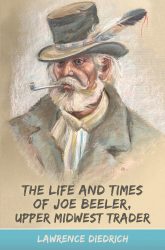 The Life and Times of Joe Beeler, Upper Midwest Trader

The story covers the Golden Years of the Fur Trade Industry in North American from 1780 to 1840. With a historical background of those years, the reader is taken through the Revolutionary War, The War of 1812, and the maturing of the young American Nation into an economic power on the world stage. The fictional Joe Beeler family, primarily involved with The Fur Trade, is threaded through these years. How initial contact with the Indian tribes by the Fur Men resulted in a better standard of living for the tribes, but the down side being the Indian’s loss of their culture, and style of living. The settlement of land further and further west by the young American Nation caused the displacement of the Indian Tribes and the decline of The Fur Trade. Through it all, Joe Beeler maintained their family cohesiveness, despite the tragedies and hardships of living in the 19th century!

ABOUT THE AUTHOR - Lawrence Diedrich

Larry Diedrich worked as a Manufacturing Engineer for Instrument Company in Middleton, WI and resided in Lodi, WI for 25 years. In 1999, Larry and his spouse Annie retired to Heber Springs, Arkansas and settled into retirement enjoying the best years of 35 years that they were married. Both Annie and Larry were pilots living in an airport community, Skypoint Estates and enjoyed the best it had to offer. With their Aeronca Chief, they toured the Southern fly-ins. Their greatest trip was their two month honeymoon trip to Alaska with the Chief. Tragedy struck nine years ago with the passing of Annie from cancer. Larry immersed himself in the reenactment scene, attending many “rendezvous,” meeting new people, gathering information which resulted in this book!