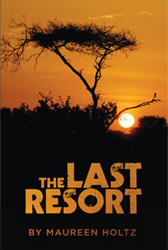 It’s 2021 and the small African nation of Mkanda, anxious to lift itself from poverty, legalizes physician-assisted suicide to encourage a new type of travel–euthanasia tourism. With the United States slashing Medicare coverage and instituting new rules, Mkanda appeals to those desperate to end their struggles in a timely way. In Illinois, Hank Grimmager, suffering from ALS and the early stages of Alzheimer’s, pleads with his devoutly Catholic daughter, Olivia Harper, to take him to Mkanda. Olivia doesn’t want to bypass all her beliefs and be a party to her father’s death, but finds it impossible to ignore his needs.

Moving between Central Illinois and Africa, The Last Resort, erupts into inevitable conflict when religion and money are involved in matters of love and health.

ABOUT THE AUTHOR - Maureen Holtz

Maureen Holtz lives in Central Illinois. She is the co-author of Robert Allerton: The Private Man & The Public Gifts, and the author of Allerton’s Paradises and Monticello (Images of America).