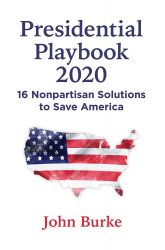 “And sometime, at some point, do something for your country.”
—David McCullough, Pulitzer Prize-winning historian

That quote from Pulitzer Prize-winning historian David McCullough resonated so deeply with Trek Bicycle President John Burke that he set out to write a book laying out his vision for the country, an America that can
once again be a shining city on a hill.

Burke says it’s time to cut through the political fog and deal with the facts: The U.S. is facing serious, long-term problems, and politicians in Washington, D.C. are ignoring them. These critical issues can be resolved, he says, with the determination and shared sacrifice of the American people.

From battling climate change to saving Social Security, from reducing the risk of nuclear war to rebuilding crumbling roads and bridges, from campaign finance reform to improving the health of Americans, John Burke offers his 16 Nonpartisan Solutions for putting the United States on a stronger foundation.

This is his Presidential Playbook, a plan for America’s future—and a call for all Americans to come together and … do something for our country.

ABOUT THE AUTHOR - John Burke

John Burke began working at Trek Bicycle in 1984 and has been president of the company since 1997. In addition to leading Trek, John served as chairman of President George W. Bush’s President’s Council on Physical Fitness and Sports and is a founding member of the Bikes Belong Coalition. John and his wife, Tania, live in Madison, Wisconsin.