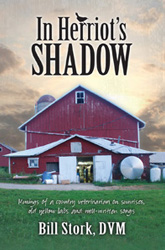 In Herriot’s Shadow is a celebration of chivalry in a grocery store parking lot, generosity in a farm field, and gratitude in two packs of sandwich cookies. Dr. Bill Stork has fully evolved the notion that a person who is kind to animals is inherently good, often in the face of public perception to the contrary.

Working alongside men and women whose physical strength is dwarfed by their superhuman depth of character and family values, he has felt the anguish of a corn crop spiking, turning brown and begging for a drop of water, and shared the unbridled exuberance when the “million dollar rain” came just in time.

Embracing the notion that the human-animal bond applies to all creatures, great and small, Dr. Stork was centered and rededicated in his profession by a 70-year-old farmer openly weeping and hugging a 21-year-old cow named Iris as the sun rose on her last day.

Shed a tear for a dog called Buck, hold your belly from laughing as Dr. Stork survives Jack going for his jugular, ponder how Pumpkin developed her outer rind, and make the acquaintance of the Amazing Dick Bass – In Herriot’s Shadow weaves together stories about B.B. King, temperamental cows, biking through Texas, therapy cats and life-saving dogs.

Bill Stork grew up in Decatur, Illinois and graduated from the University of Illinois-College of Veterinary Medicine in 1992. The same year he moved to Wisconsin and started working at the Lake Mills Veterinary Clinic. He currently shares a 7-acre petting zoo with a displaced Wyoming cattle dog, and aging Labrador, 2 goats, 4 cats, 11 horses and his one-person support crew and partner, Sheila.