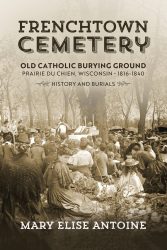 North of the city of Prairie du Chien lies a small burying ground, which the life-long residents of the community call “Frenchtown Cemetery.” In the early 19th century, the cemetery was known as the Old Catholic Burying Ground.

Though left to nature for many years, the Old Catholic Burying Ground at Prairie du Chien did not suffer the fate of the early cemeteries of Green Bay and La Pointe. A sense of honor and sanctity of the burials in the Old Catholic Burying Ground persisted. The men, women, and children buried in the cemetery were not reinterred in newer cemeteries established at Prairie du Chien.

The history of the Old Catholic Burying Ground is an important part of the history of early Prairie du Chien and the Wisconsin territory. The cemetary’s existence was a direct result of occurrences far greater than the events of daily life at Prairie du Chien. The cemetery came into existence as a consequence of the United States’ national policy after the War of 1812 to gain political control of the western reaches of the Northwest Territory. This frontier policy continued along the upper Mississippi until the territories of Iowa, Wisconsin, and Minnesota were established. This period of change in the upper Mississippi River valley—1816 through 1840—is the era that brackets the years in which the cemetery was the only burial ground for the residents of Prairie du Chien.

In Frenchtown Cemetery, Mary Elise Antoine presents a history of the Old Catholic Burying Ground—the events which brought the cemetery into existence, the priests who visited the prairie to minister to the spiritual needs of the community, the abandonment of the cemetery, and the reverence and preservation of this small plot. Based upon intensive research, Mary Elise compiled a register of burials in the cemetery. For each person so listed, Mary Elise included a biographical sketch.

Frenchtown Cemetery also includes a short history of the Brisbois Cemetery, which is atop a bluff overlooking the prairie.

ABOUT THE AUTHOR - Mary Elise Antoine

Mary Elise has over 40 years of professional experience working in historic preservation and for historic sites. While residing in New York State, she was coordinator of interpretation for the New York State Division of Historic Preservation. She was then director at Fort Johnson, the 1749 home of Sir William Johnson.

Returning to Prairie du Chien, Mary Elise was curator of collections and research at Villa Louis State Historic Site for many years. She is on the board and past president of the Prairie du Chien Historical Society, where she coordinated the restoration of the St. Germain dit Gauthier House. She is the Wisconsin ambassador for the French Heritage Corridor and on the board of the Wisconsin Trust for Historic Preservation.