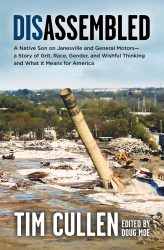 Disassembled
A Native Son on Janesville and General Motors–a Story of Grit, Race, Gender and Wishful Thinking and What it Means for America.

There have been many articles and even books written on what happened after General Motors closed its plant in Janesville, Wisconsin in 2008 after some 90 years of operation.

Here, for the first time, former Wisconsin state senator—and Janesville native—Tim Cullen tells the inside story of how and why it happened, and what it means for the future not only of Janesville, but cities across America.

Cullen, who co-chaired the governor’s task force that tried to save the Janesville plant, provides a sweeping history of the plant from its boom years to the abyss, while noting the struggles African Americans and women faced in getting hired and treated fairly. Along the way he finds some heroes, including an early African American GM employee; a woman who insisted on gender equity in the plant; and Walter Reuther, the legendary labor leader.

Perhaps no one is better qualified than Tim Cullen to tell this important story. Tim worked in the Janesville GM plant as a college student and he was there, decades on, when presidential candidate Barack Obama told a hopeful gathering of GM employees and other stakeholders he would do what he could to ensure its success.

Less than a year later, the plant closed. In “Disassembled,” Tim Cullen reveals what happened.

ABOUT THE AUTHOR - Tim Cullen
Edited by Doug Moe

Tim Cullen was born and raised in Janesville, Wisconsin. Cullen graduated from UW-Whitewater with a Major in Political Science with a minor in History. He is the third generation of his family to work at General Motors. He worked there for four summers in the 1960s to pay his way through college. He also was involved in helping GM and the UAW as a state senator representing Janesville. Governor Jim Doyle appointed him to co-chair a task force in 2008 to try to save the plant. He has had a lifetime of connections with the “plant.” The first election he won was to the Janesville City Council in 1970. Four years later Cullen was elected to the State Senate at the age of 30. He went on to become Senate Majority Leader and in 1987 he became Secretary of the Department of Health and Social Services under Governor Tommy Thompson. In 1988 Cullen took a job with Blue Cross and worked with them for the next 20 years. In 2010 he decided to run for his old Senate seat. He was elected and served until 2015. Today Cullen still lives in Janesville and spends his time working with the three foundations he started. He is also the chair of the board of Common Cause-Wisconsin.

Multicultural Teachers Opportunity Fund he started in 2008. The sole purpose of the Fund is to raise money for college scholarships for Janesville students of color. The goal is to support those students who wish to become teachers and are willing to return to Janesville to teach for at least three years.

“Fascinating and insightful commentary on the complicated relationship between GM and Janesville, WI over 85 years. Cullen examines their interactions, their influences on one another, and how this partnership reflects 20th Century America. While reading, I felt a roller coaster of emotions. I was surprised, conflicted, angered, inspired, and ultimately hopeful for what we, as everyday citizens, can accomplish in the face of adversity. This book presents reflections of the past, relevance for the present, and encouragement for the future.”

—Patricia Thom, retired professor from UW Rock County and daughter of Doris Thom, whose story is a significant part of this book