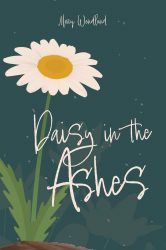 Daisy in the Ashes

A tiny bud of hope pushed its way past the ashes of painful memories and began to rise in her heart like a little flower. The flower continued to grow, blooming, opening its pure white petals to show a golden center, fuzzy and soft, that peeked up at the sun and laughed. It pulled nutrients from the ashes around it and from the rain of tears, and still it grew.

And it was going to thrive.

ABOUT THE AUTHOR - Mary Wendland

Mary and Edward were married for almost 50 years. During those years, they bought several farms, had five children, and lived out their dreams. When the children were grown, Mary went to work at a florist, where she loved delivering to people and meeting new faces. She wrote not only of her childhood but also her adult life and happenings in short stories and poetry, which have been compiled into one book called The Ever-Circle of Seasons. Being once a child with no advocate, her desire to help others who could not speak for themselves grew as she grew older. Within her writing, her value of and kindness toward those that society sometimes calls the helpless (the elderly, special needs, children, etc.), especially, teaches true compassion and the value of all life. Those who knew Mary agree that she had a quiet sense of humor, a deep faith that guided her actions, and open arms for anyone who needed help. After Mary began writing as an adult, she became a founding member of the Watertown, Wisconsin, writer’s group Writers on the Rock. Her poem “Floodgate” won the first place Jade Ring Award for poetry at the Wisconsin Regional State Writers Association in 1998. Mary passed away in May 2003, and Edward has since finished her writings as a memorial to her life and to give others the ability to learn from her life and words.