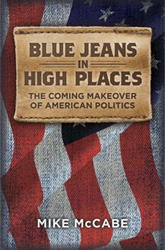 Blue Jeans in High Places is both a hunt for lost political treasure and a how-to guide for nursing American democracy back to health. The book details how our political culture has become diseased while at the same time dispelling the cynical view that politics has always been like it is today and always will be. And it prescribes a groundbreaking cure.

Identifying distinguishable periods during which the nation’s ruling class employed different instruments of social, economic and political control, author Mike McCabe brings readers to terms with the troubling reality that we face another historic moment when democracy in America is giving way to oligarchy and gives this dismal period a name that captures its essence.

The book reaches back to episodes from the past that speak powerfully to what our response could be to the current condition of American democracy. Tales of crooked political dealings, enterprising leaders and remarkable outcomes produced by dirt-poor unlettered men and women compel us to compare and contrast their predicament with our own. And we are left with little choice but to acknowledge that conditions like today’s have been faced before… and overcome. Blue Jeans in High Places spells out six steps citizens can take today to get back in the driver’s seat of our government. American politics is overdue for some extensive renovation. This book is about where it will happen, who will do it, and how.

ABOUT THE AUTHOR - Mike McCabe

Mike McCabe brings a farming background and a professional lifetime of experience in politics, journalism, public sector management and nonprofit leadership to his work. He is founder and president of Blue Jean Nation and for 15 years ran the Wisconsin Democracy Campaign, a nonpartisan watchdog group that tracks the money in state elections and works for reforms making people matter more than money in politics. In that role, Mike was a leading whistle blower and among the nation’s best political money trackers. He was recognized by the Wisconsin Freedom of Information Council and the Society of Professional Journalists as the “Citizen Openness Advocate of the Year” for 2012. His efforts have attracted the attention of national news networks including ABC, CBS, CNN, Fox, NBC, MSNBC, NPR and Al-Jazeera English, as well as newspapers including “The New York Times”, “Washington Post”, “USA Today” and “Wall Street Journal”, and magazines such as “Time” and “New Yorker.” Among the many media organizations citing Mike’s work or quoting him in their stories are national news services such as The Associated Press, Bloomberg News, McClatchy and Reuters, and online political news sites like Politico.com, Slate.com, and Huffington Post. A much sought-after public speaker, Mike has made more than 1,500 presentations to a wide range of audiences over the course of his career.