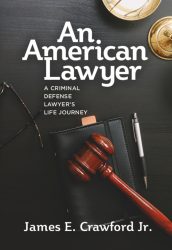 How could a kid who was labeled a “low-IQ” student in early grade school with virtually no chance of academic success, let alone success in business, pull off a miracle? How did he find a way out of the deep, dark cavern of depression and underachievement to realize the success that most people only dream of?

Men who have experienced physical, mental, and sexual abuse are figuratively put in a straitjacket that deters success. The emotional scars experienced by adult children of alcoholics, and the addictive allure of pornography mixed with abuse, create a deadly elixir that destroys lives. This narrative is a “wake-up call” to the therapeutic community to create and design treatment programs to attack this syndrome that Jim has labeled the Trilogy Modum.

James E. Crawford Jr. Esq. is a thirty-year experienced trial lawyer who has handled thousands of criminal sex offense cases in our court system. He has discovered hard-hitting facts as to why there is a tremendous increase in sex crimes and domestic violence in this country.

Jim walks you through his own childhood struggles and the road he traveled to become an American lawyer. He gives you a “how-to” road map to find success in your own life and business. Although improbable, he ultimately realized his dream of standing next to a client with a fictitious sword in hand and using every tool he has developed as an attorney to protect and shield his clients.

Underpinning his career and life, The American Lawyer is really about a father and son who desperately tried to connect and the journey to find the redemption they both grasped in the end.

Jim Crawford is the founding and managing partner of James E. Crawford Jr. & Associates, LLC (trading as JC Law), with thirty years of trial experience in federal and state courts throughout Maryland and beyond. Mr. Crawford has enjoyed an extraordinary record of success in toiling the criminal courts, becoming recognized as one of the ablest and most tenacious trial lawyers in Maryland. His primary areas of practice include all types of serious criminal and civil law, as well as high-profile litigation. In his three decades of experience, Jim has represented thousands of clients in courts throughout Maryland. He has been in a Maryland courtroom just about every day of his working career and has handled thousands of cases in circuit court, U.S. District Court, and in many administrative agencies. The attorneys at James E. Crawford, Jr. & Associates, LLC, have also successfully tried cases in just about every state and federal courtroom in Maryland.

His father, James E. Crawford Sr., began practicing law in 1960 in Baltimore City, where he handled many of the same types of cases as his son. He worked for decades with Peter Angelos on many serious and noteworthy cases. He was very involved in Maryland’s political landscape until his death in 2008.

Building on Jim Sr.’s success, the younger Mr. Crawford established his firm in 1992 and has trained each of his experienced attorneys to work aggressively on their clients’ behalf. In essence, because of Jim Sr.’s work, this law firm has the knowledge, creativity, and skills developed over sixty-one years of practicing law.

Mr. Crawford is highly regarded by his clients, peers, and the judiciary. It is, without doubt, undisputed that to obtain a successful result you need a zealous and relentless trial lawyer. That’s Jim. He has also put his fingerprints on the firm as to how each lawyer represents their clients. Although Mr. Crawford has been established as a criminal defense attorney for many years, he also handles serious civil litigation matters, including domestic, civil litigation, and personal injury litigation.

Along with many other recognitions and awards, Jim’s firm was named “Best of Baltimore” and is looked upon as an innovative and aggressive law firm that gets the job done.

After law school, Mr. Crawford immediately went into private practice in 1992 by opening a law office in Baltimore. At the time, he was a young general practitioner who handled many different types of cases with a focus on criminal law. Over the years, he established himself as a premier practitioner in the state of Maryland. In order to accomplish his mission of practicing law on an extremely high level, he realized that he must offer the type of services to the community that he would want if he needed legal representation himself. He gradually expanded the firm into the full-service law firm that exists today. Presently JC Law is viewed as a “go-to” firm for many Marylanders and businesses. With over twenty lawyers and thirty-five support staff, JC Law is well equipped to take on any issue presented.

One of Mr. Crawford’s passions has always been politics. He comes from a family that believed service to the community, and being involved in political life was a fundamental requirement as a productive member of society. Mr. Crawford’s political career ranges from being noted as one of the youngest elected officials in the state’s history, to handling many state, local, and judicial campaigns.

Since entering private practice, Mr. Crawford has handled many notable cases that appeared in the media. The clients he represents range from ordinary citizens to police officers, professional athletes, lawyers, doctors, politicians, and other persons of notoriety.