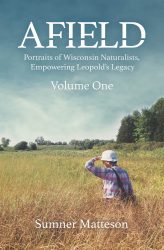 For 40 years Sumner has regularly made time to record the stories of Wisconsin field biologists, ecologists, conservation biologists, and land stewards. Among them are the well-known and recognized as well as the more obscure and overlooked. All made vital contributions to natural history and conservation in Wisconsin. Some were scientists and teachers. Others were writers and advocates, public servants and citizens. All, in some way, were wisdom-keepers. Their lives span a century and a half, and many never met. Yet they are connected across their diverse places and times and experiences. They shared a passion for what Aldo Leopold called “things natural, wild, and free.” They carried the same conviction that we are bonded to the land and all its inhabitants and to one another upon it.

Sumner’s perseverance in gathering their voices has only increased the value of his work. In fact, we need these voices and stories now more than ever.

We need them to ground us as we face a future of rapidly changing social, economic, and environmental realities, most especially the uncertain effects of accelerating climate change.

We need them, more than anything, to nurture the next generation of citizen-conservationists.

—From Curt Meine’s Foreword to AFIELD

ABOUT THE AUTHOR - Sumner Matteson

Sumner Matteson has worked as a nongame biologist, conservation biologist, and avian ecologist for the Wisconsin Department of Natural Resources since 1981. He has authored and co-authored many papers and reports on non-game birds, and for 25 years led the successful effort to restore trumpeter swans to Wisconsin, working with a diverse team of partners in the public and private sectors. A graduate of the University of Wisconsin-Madison (BA, MS), he has lived in the Madison area for nearly 50 years. Also, he is a past president of the Wisconsin Society for Ornithology. His longtime interest in the history of Wisconsin conservation and in those interested in natural history study led to his development of the Wisconsin Naturalists Project, which resulted in this first volume.