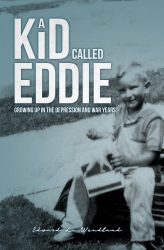 I dreamed about a little boy on a farm. It had apple trees, berries, and dozens of chickens of every color. The little boy carried his slingshot as he walked to school every day and chased rabbits with his dog in the woods. He had a pet goose that followed him wherever he went. His grandpa told him funny stories and called him “Eddie.” Everyone gathered on Sundays for chicken dinners and listened to the radio talk about the Great War. It was a beautiful dream, and then I woke up and realized it wasn’t a dream. I was that little boy. I am Eddie.

ABOUT THE AUTHOR - Edward “Eddie” Wendland

Edward “Eddie” Wendland was born in August 1933 and grew up in the suburbs of Milwaukee, Wisconsin, on a “city farm.” He and his wife, Mary, were married one month shy of fifty years before passing away in 2003. They have five children and a number of grandchildren and great-grandchildren.

In 2014, Ed started to type the stories of his childhood on his typewriter, compiling them with the sole intent to gift them to his children and grandchildren as a Christmas present. Throughout the following six years, he continued to add stories, bringing in the help of an editor to arrange and rearrange until the book was in publishing format. Additionally, Ed has worked on finishing Mary’s book, Daisy in the Ashes, polishing and editing, and eventually getting help from the same editor to write the final chapter.

Ed continues to fill his time typing stories for another book about his life and love with Mary called With All My Heart.